After ten years of success on the Newcastle/Gateshead Quayside, the Great North CityGames came to Stockton-on-Tees in 2019, alongside the growing Simplyhealth Great Tees 10K and Simplyhealth Junior Mini Great Tees Run.

The day began with the Mini, Junior and Great Tees 10k mass participation runs on Stockton's Riverside. The event, in its second year, saw thousands of participants taking part.

And Stockton High Street was the perfect location for the specially-erected track, long jump and pole vault arena as thousands of spectators descended on the town centre for the CityGames.

Richard Kilty tasted victory on his homecoming as huge crowds massed on Stockton High Street for the Great North CityGames.

The Teesside Tornado was involved in both the 100m and the 150m races on the pop-up track in the town centre and, while he took the win in the shorter distance, he was forced to settle for third place in the 150m behind 4x100m relay teammates Nethaneel Mitchell-Blake and Harry Aikines-Aryeetey.

There were also victories for Olympic and World champion Allyson Felix in the women’s 150m, Paralympic champion Jonnie Peacock in the men’s IPC 100m and Sophie Hahn in the women’s IPC 100m on a day when the spotlight fell on Stockton on Tees, who hosted the Great North CityGames for the first time in the event’s 11-year history.

Check out our images from the event... 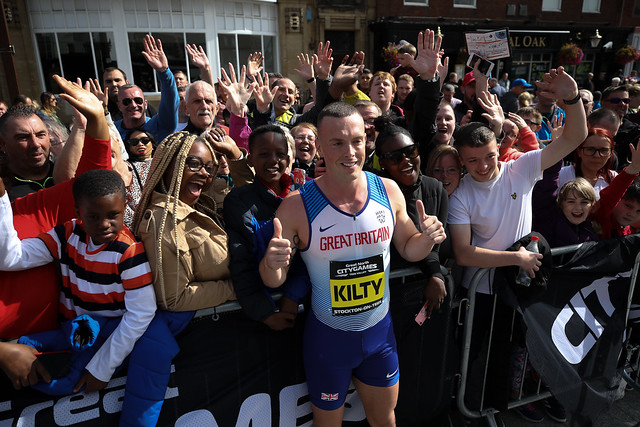 Get involved - Take part in one of the biggest sporting weekends in the North East in 2020 and take on the Simplyhealth Great Tees 10k as it returns to Stockton-on-Tees.

The events were staged by the Great Run Company in partnership with Stockton-on-Tees Borough Council.